Many corners of today’s world are going through a period of nationalism and turning inward. This is evidenced by events such as Britain’s Brexit vote or the "America First" stance of the current U.S. administration.

But you wouldn’t pick up on that by looking at current foodservice trends across the continents. Because on menus, globalization marches on.

Let’s look at how these megatrends are being expressed in a number of countries and regions and what implications these trends have on operators and their supplier partners.

Going back to basics with wholesome, "clean," unaltered food has become a priority around the world, particularly in the light of food safety scares and scandals over the past few years, which have shaken industry heavyweights from Europe and the U.S. to China, Japan and India. 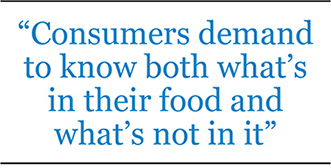 Consumers demand to know both what’s in their food and what’s not in it—many are looking for items free of everything from gluten and added sugars to GMOs and artificial colors. Indeed, transparent sourcing—both in practice and in communication to the consumer—has become a high priority.

Technomic’s global polling provides some context to this trend. Around 75% of consumers strongly agree that restaurants should be more forthcoming about where they get ingredients, with this demand most urgent in India and Mexico. About 90% of consumers worldwide say they’d be more likely to purchase restaurant fare described as fresh. Some 75% of consumers are drawn to foods that are natural, authentic, premium and locally sourced. Around 60% of consumers like to see organic, GMO-free, functional and sustainable items. By region, Latin Americans are most insistent on freshness, Asians on authenticity and Europeans have the strongest preference for locally sourced foods, with six in 10 saying restaurants should always purchase local ingredients.

Consumers hunger to know the "story" behind their meal, and they want authentic presentations of traditional regional and ethnic foods. In Kuwait, Naif Chicken differentiates with fresh, vegetarian-fed halal chicken sourced from its own Kuwaiti hatchery and farms. ASK Italian in the U.K. underscores its relationship with a family-based olive oil supplier in Puglia, Italy, where two brothers insist on pressing their olives within 24 hours of harvest. Hunter Gatherer, an emerging concept in Shanghai with a seed-to-table philosophy, touts its use of natural, sustainable and chemical-free ingredients sourced from its three self-operated farms.

What could be more authentic than the local favorites that have been sold on the streets for centuries in cities around the world? Brick-and-mortar restaurants have been borrowing ideas and menu items from street vendors for years.

The trend plays out in a variety of venues, including food trucks, gastroparks, marketplaces food hall concepts and pop-up storefronts. Timbre+ in Singapore offers chef-driven fare from various operators in a street-like setting complete with art and music. In the United Arab Emirates, the Last Exit food truck theme park concept brings together operators purveying street foods from around the world—from Iraq to India to Latin America.

The rising prominence of snacking in global lifestyles ties into this trend. Returning to Technomic’s global data, almost three-quarters of consumers surveyed say that they eat a snack at least once a day, with snacking most frequent among Middle Easterners. Six out of 10 consumers worldwide want restaurants to offer items in different portion sizes at different price points, and four out of 10 look for snack-size items on menus. Half of consumers also report that they enjoy LTOs and seek them out.

So, it’s no surprise that chains are offering snack-size LTOs to showcase street foods. KFC in South Korea, for instance, ran a street food promotion offering traditional Korean snacks, such as tteokbokki, in familiar KFC flavors.

No longer just an alternative for the dining party’s "veto vote," vegetarian and vegan meals are finally getting real respect. Around the world, there’s a significant consumer segment seeking these foods. According to Technomic polling, 34% of consumers globally—including 44% of Asians—say they tend to purchase vegetarian fare in restaurants, and 28% worldwide look for vegan items. But an even broader group has adopted the flexitarian idea—forgoing meat occasionally for the sake of their own health or the global environment.

Some of the most interesting plant-based fare is coming out of countries with a strong meat-eating tradition. Witness, for instance, the rise of Hareburger, a vegetarian, vegan and health-focused concept in beef-centric Brazil. This concept’s burgers are made of lentils, quinoa and shiitake mushrooms. In another country with a pastoral culture, Australia, Hog’s Breath Cafe—a steakhouse—menus an avocado and vegan schnitzel wrap with cherry tomatoes, cos lettuce, slaw and balsamic dressing. And in meat-and-potatoes Britain, the Temple of Seitan manages to turn vegan meals into junk food with indulgent, deep-fried, wheat protein-based "chicken" served with french fries.

Even McDonald’s is testing the waters of plant-based, meat-free dining. The chain is currently offering a McVegan burger at its restaurants in Sweden and Finland.

Globally, around a third of consumers say they typically order their restaurant meals with some sort of customization, but proportions vary from one region to another. Colombian, Mexican, Saudi Arabian and Indian consumers are more likely than others to say the ability to customize their meal is important.

The Chipotle-inspired model of staff standing behind a counter, assembling orders to customers’ specifications, has found remarkable success around the world. But now it’s coming up against another megatrend: the growth of grab-and-go takeout and on-demand restaurant delivery. Fewer patrons are willing to wait even a few minutes to collect the food they’re customizing. How can consumers’ yen for personalized fare work in this new environment?

Many concepts are responding with platforms from virtual build-your-own pages on their online platforms to real-world ordering kiosks where guests can build the item or meal of their choice. For instance, Malaysia-based dessert beverage brand CoolBlog is based around speedy, convenient self-service kiosks offering 25 different flavors in ice-blended and smoothie creations, with over 300 possible product variants.

Other restaurants are rethinking their format. Kamps, the longstanding German bakery chain, is looking to accommodate off-premise occasions with a new self-service concept built around quality, speed and convenience.

The restaurant industry is in a state of constant change, with new products emerging at a rapid pace and trends shifting and evolving across the global landscape. For both established national brands and international chains entering new markets, acceleration of menu development is making it harder to stand out. Novel trends and unexpected competition bring disruption but also open up new opportunities.

Today’s consumers purchase food from restaurants with greater frequency, have more sophisticated tastes and are very much part of a globalized, urbanized, digitized and interconnected world. But dining habits, preferences and priorities continue to vary widely across regions. Yet, consumers everywhere are demanding fare that is locally sourced, authentic to local traditions and supportive of local lifestyles, as well as items that meet their individual dietary needs.

Foodservice suppliers in global markets need to study both worldwide trends and culturally specific traditions for profit-making menu innovation ideas that they can bring to their operator customers. In a world in which experimentation, innovation and attention-getting are prioritized, LTOs and seasonal specials offer the greatest opportunities.

Consumers’ growing demands for transparency, local sourcing and sensitive treatment of the people, animals, land and waters in the supply chain should not be ignored. Suppliers should see and help operators see this new paradigm in terms of opportunities for restaurants to stand out from the competition and build a reputation for both purity and excellence.

What's to come in the coming year for foodservice? Here are Technomic's predictions for 2023 foodservice trends.

Impact of a Recession on Foodservice

What does this mean for restaurants?

As we reach the halfway point of 2022, let’s look back at our trend predictions for the year and see where each of them stands.

At the close of 2021, Technomic forecasted 2022 as the “Year of the Climb,” and since that time, we’ve witnessed the industry’s forward push toward resurgence and success. How has our 2022 forecast borne out over the past six months? Read on to discover where we stand today.